Sepsis, commonly known as blood poisoning, is the most severe form of an infectious disease which causes over 75 000 deaths annually in Germany. Early, reliable pathogen identification is pivotal with regard to the course of the disease. However, this is often not possible using current standard procedures. A remedy could be provided by new, digital methods of pathogen identification which combine genomics and bioinformatics.

In total, the DigiSep study is planned for 410 patients suffering from severe sepsis with the participation of around 20 German hospitals. The observation period for the sepsis patients in the study will be a total of 180 days. The research syndicate expects the study to reveal information on the effects that the innovative diagnosis approach has on the septic patients’ mortality, the duration of their antibiotic treatment and the length of their stay in the intensive care unit. The aim is to improve treatment options for sepsis – a life-threatening illness which affects more than 300 000 people annually in Germany.

The study considers not only clinical outcomes, but also cross-sectoral expenses connected to the occurrence of sepsis/septic shock. This should make it possible to develop approaches to reducing the extremely high healthcare costs which result from the treatment of patients with sepsis or septic shock, as well as from the associated secondary complications (such as kidney failure).

In the study, half of the participating patients (n=205) will have their blood examined on day 0 and day 3 using a new, digital precision diagnostic technique, in addition to routine diagnostics. This new technique can recognise more than 1 500 germs (bacteria, DNA viruses, fungi and parasites) within 24 hours (see info box). This means that, on the one hand, precise information is rapidly available regarding the type and quantity of pathogens in the blood, so that a precisely tailored antibiotic therapy can be implemented. On the other hand, the second analysis also offers valuable information on whether the initiated antibiotic treatment has already taken effect.

For the other half of the patients participating (n=205), current standard diagnostics, i.e. the often time-consuming cultivation of pathogens in various secretions and bodily fluids (such as blood cultures), will be  used. For all patients in the study, the attending intensive care doctors can make use of a special panel of experts with whom they could discuss findings and treatment decisions.

The DigiSep project is led by the Clinic for Anaesthesiology and Intensive Care at Essen University Hospital and the Medical Faculty of the University of Duisburg-Essen as lead managers, in close cooperation with the Chair of Health Economics and Health Care Management at Bielefeld University, the Coordination Centre for Clinical Trials (KKS) and the Institute of Medical Biometry (IMBI) at Heidelberg University Hospital and with the health insurance companies AOK Rheinland/Hamburg, BARMER and the Techniker Krankenkasse. As a technical partner, the biotechnology company Noscendo contributed its digital precision test DISQVER, which has a CE mark for in vitro diagnostics (IVD).

The DigiSep project is supported by the innovation fund of the Federal Joint Committee (G-BA) with approximately 3.1 million euros. The G-BA is the highest decision-making body of joint self-government in the German healthcare sector. It makes decisions on which services can be used by people insured in the state healthcare system.

In the patient’s blood sample, the cell-free DNA is examined using next-generation sequencing (NGS), a new, particularly rapid method of DNA analysis. Bioinformatic algorithms compare this information with a large clinical genome database, which includes around 16 000 microbes. Within 24 hours of the sample arriving at the laboratory, a report is thus available on all germs found in the blood, which should make more targeted treatment possible.

Noscendo GmbH develops bioinformatics solutions for the identification and evaluation of pathogens of bloodstream-associated and other infections. The proprietary diagnostic platform has been validated together with leading clinicians in Germany and is offered in the field of bloodstream-associated infections. Noscendo collaborates with leading clinicians, development partners, logistics service providers and innovation-oriented healthcare providers and reimbursers. 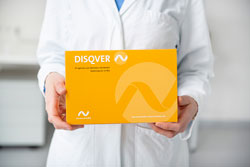 More precise diagnostics – more knowledge: Find out more about the clinical use of DISQVER! 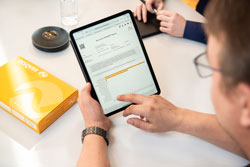 Read more about Noscendo and DISQVER or visit us at trade fairs and conferences! 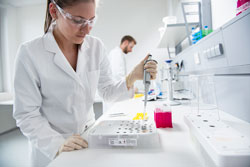